Didn’t do any blogging yesterday, on account of my most excellent holiday in sunny Cairns, from which there will be photos coming in the next day or so. I did manage to do some character sketching, so please excuse the poorly photographed scribbles below…

I was tagged to do this character blog-hop by The Paper Butterfly. She’s a keen writer, doing some really neat stuff including some Final Fantasy fan-fiction, and using this creative outlet to bouy up her spirits in the face of a daunting array of chronic medical conditions. Oh, and she’s an all round cool gal besides. Her characters are Zack and Kyle, a hero and a nice guy respectively (and Kyle does precisely what nice-guys do). Here’s the link for those of you that are interested: The Paper Butterfly’s Character Blog Hop

Fictional, but (very) loosely based on the historical pirate archetype.

When/Where Is It Set?

Is there anything we should know about the character?

Don’t trust him. As a character, and as a narrator.

What is the main conflict?

He has survived this long because he responds to every situation with a “fight” response, and always puts himself first. At the start of our tale, this has finally put him at odds with everyone, even his crew, and he maroons them all rather than face mutiny or back down. His attitude has to change, but he rejects this and sets off alone, for a holiday in the tropics to regroup.

What is Roger’s personal goal?

To enjoy a break, recruit a new crew, and return to plundering the seas, just as soon as the entire Royal Navy stops hunting for him. Of course it doesn’t work out this way, when he finds his fate tied to a girl (Xing, below) whose personal philosophy is the antithesis of his own.

Is there a working title for this novel, and can we read more about it?

Last Resort, and yeppers. >80% of my blog is about it at the moment.

When can we expect the book to be published? 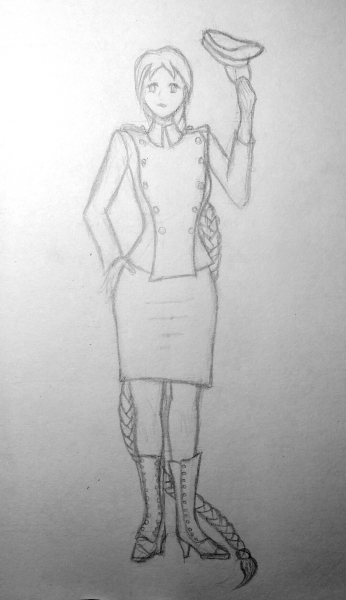 Fictional, though her dress is a mixture of HK Chinese working class from the 19th century and, when she’s at work, an Elizabethan Chauffeur uniform.

When/Where Is It Set?

As above for Roger, though while he is reaving across the asteroid belt, her life is a big-city affair.

Is there anything we should know about the character?

There’s something about this girl…

What is the main conflict?

She is no fool, but stubbornly refuses to concede that her gender, her poverty, and to some extent even her race all preclude her from reaching her dreams. She needs to set her sights on something real if she is to have any hope of success…

What is Xing’s personal goal?

To join The Review and travel the breadth of the empire, acting, dancing and singing.

Now it’s time for me to tag three other authors. Not sure if they’ll be doing one of these, but I suggest checking them out anyway.