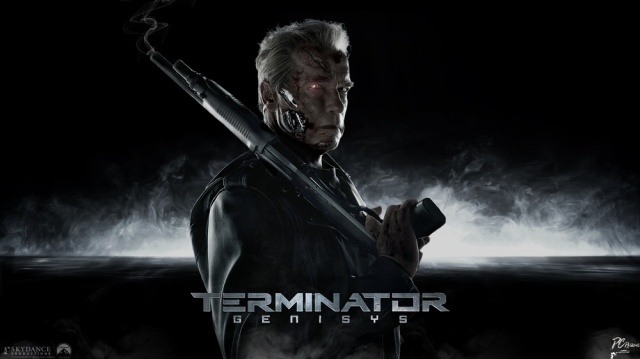 So I went to see an early screening of Terminator Genisys. I don’t normally get to the movies on a Monday night, but as an afficionado of ballsy Austrian folklores and a devoted Arnocorps rescue team member (fan), I thought why the hell not.

This movie is the sequel that Terminator II: Judgement Day deserves. It’s the third film. NO ARGUMENTS. There were not another two terminator sequels.*

Why am I gushing lyrical about what should, to any reasonable expectation, be another Arnie revival vehicle / hollywood-juggernaut cash-in on an old franchise? Well, because (full disclosure) 1. Tee-two is one of the first films I ever got excited about, back in my booger-picking, BMXing days, and 2. because they appear to have consulted a REAL WRITER to handle the script.

You know, as opposed to letting some trained monkeys throw alternating fistfuls of poop and regurgitated terminator two scenes at a storyboard, and seeing what sticks (HINT: the answer is “poop”)

Things that I loved about it (and I’ll stay vague to avoid spoilers, but you might be smart enough to work things out. You’ve been warned):

So if you’re wondering whether this is just another re-boot, no. It certainly is not. This is a return to form, like Metallica’s Death Magnetic, or the USA’s Barrack Obama.

Arnie’s finally back. Trust me.

*I don’t know about the Sarah Connor Chronicles, but I’ll be sure to watch them someday, Arnie or no.