Like many people, I had my socks rocked by the epicosity that is Mad Max: Fury Road. This post will be mainly about my thoughts on the film, so I’ll put all the non- Mad Max, nonspoiler stuff at the beginning, followed by a spoiler warning.

So here I am, having mostly finished my last day of relative freedom in Korea. I’m heading back tomorrow, and starting work on Monday. This is not good.

Although, something that is good – TINY TINY BEERS

I have had an epic time though, and met some awesome people along the way. I’ve also had a few inspirations for scenes in book two, including a temple-top swashbuckle through the lanterns of Buddha’s birthday celebrations.

Buddha’s birthday lanterns. LOTS OF THEM

I’ve walked up a mountain pushing a baby stroller on a hot day (the beer at the top tasted amazing). 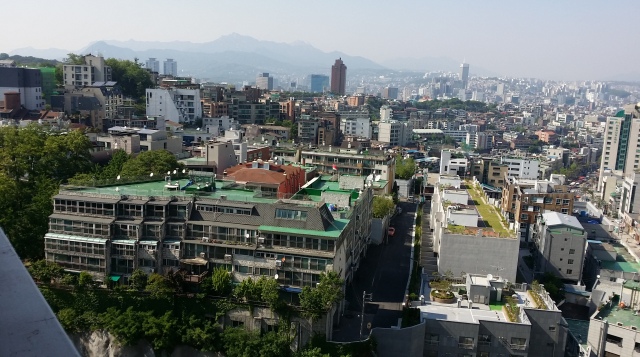 I even got a Korean traditional hanbok for my little daughter to wear.

Seven month old in a hanbok

But anyway, that was then, and this is now. It’s time to head back to reality, and on that note, I’ll now be sharing a few thoughts about the writing of Mad Max: Fury Road (because nothing is more based in reality than the fact that we’re barrelling towards a fiery apocalypse, and for the un/lucky an even fiery-er post-apocalyptic world with feature-length chase scenes).

So many things I could say just as a review… my purpose here is not to review the film though, but rather to ask: what can we learn from this writer, George Miller? Because without a doubt, there is so much we can learn from this film.

It’s been pared back.

This film is cut to the bone, with every scene serving a multitude of purposes. I’ll use the opener as an example: Max, standing on a bluff, looking out over the Australian outback, a desert panorama. A two headed lizard scuttled into frame, runs forward, and Max stomps on it. He picks up the crushed creature, eats it, and gets back in his car. He starts the car, wheels hurling sand everywhere, and hurtles down into the desert. Seconds later a war party of smoke spewing buggies chase after him, and open fire…

They could have raved about what happened to the world for ten minutes (they do for about one). They could have told us all kinds of expositiony stuff to make sense of what was the come. Instead, everything is shown:

There’s no wasted space or breath in the rest of the film either, with very sparse dialogue. It works beautifully, because it focuses you on what’s happening, and drags you headlong into the world.

Fury Road absolutely nails its core themes, without strangling you with them, and these are clearly: – redemption > survival, and PEOPLE ARE NOT THINGS. These get repeated again and again, but you’re never beaten over the head with them. There’s no wasted focus that would come from trying to touch on a dozen smaller issues, but rather every character is battling with these same themes, bad guys included.

When we’re talking about the strength of the film’s stylistic motifs, the War Boys are a case in point. If you’ve seen the film I don’t need to explain further, you’ll remember their first impression (and their lasting impression) for the rest of your fiction consuming days. For the rest of you, know that it was mainly due to the combination of strong impressions; not a mish mash of film-set post-apocalyptica, but deliberate stylistic motifs repeated again and again. Each war boy is a fanatic, worshipping their leader, Immortan Joe, and this shows in everything:

The overall effect is one of HOLY FREAKING WHOAH, these guys are scary. And that’s why it’s so fantastically subversive when !!!!!MASSIVE SPOILER!!!!! one of the War Boys comes across to fight for the good guys. The lesson for us writers might be – when designing your big set pieces (factions, etc.) work on the few very strong stylistic details that will stick in the reader’s mind.

A critique of Fury Road’s writing wouldn’t be complete without a mention of the gender relations (and sweet jeebus, how good this hath been done), and so I’ll give my thoughts here as well.

GASP! SHOCK! WHAT? REALLY? It couldn’t be possible that a film could actually steer headlong, pedal to the floor, straight into issues of rape, sexually slavery, and women’s disparity of power, and somehow come out stronger for it? Game of Thrones (the TV series, not ASOIAF) is always screwing this up, and even Joss Whedon has fallen foul of these issues in certain discussions (I can dig up the references if you like, it only goes to show that awesome dudes who genuinely love women and harbour zero misogynistic tendencies can still sometimes fall foul of this quagmire simply because of the woeful way that we’ve been conditioned to think).

Well this film goes about it with great artistry, and while I’m sure there are a thousand existing articles explaining how this is so (just google feminism fury road), here are the things I liked:

But All This Takes Away Precisely NOTHING from the Men

It has been a long time since I’ve seen a film that was at once so fair to women, and so loving to the men it portrayed. Oh boy, that claim is going to need a metric-fuff-tonne of clarification, so here we go…

So like I said, the ladies in Fury Road don’t take anything from the men. They stand together, as equals, and everyone is uplifted in the process. Everyone shines. It’s freaking rad.

If you haven’t seen it yet (WHY DID YOU READ THIS!?) go immediately, and take your significant other of either gender. My wife loved it, and she isn’t even an action movie kind of girl.

4 Responses to Mad Max: Fury Road – what a lovely film…