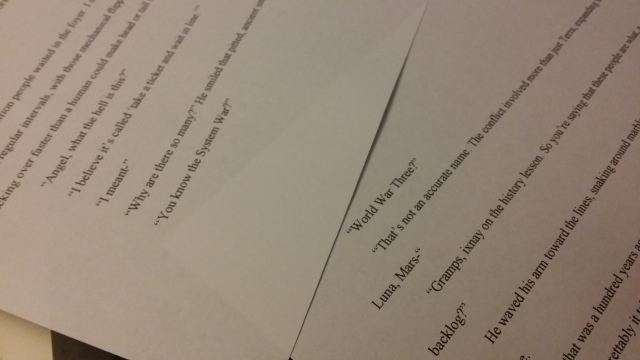 And let’s kick off with a little recap: In Writing Dialogue Part One, I talked about what we use dialogue for. The three things that your dialogue should be talking about (that I know of) were listed as:

a) ADVANCING THE PLOT

b) DEVELOPING THE CHARACTERS

Well there’s another one I forgot, and that is…

RAISING THE TENSION
There’s a heck of a lot going on in a tense scene, and your main character is not always going to know about all of it until it actually happens to them. Describing the sharknado as it hurtles down the main street is one sure-fire way to let them know that they probably should have paid up their insurance and filed a last will & testament, and possibly worn nicer underwear. Or you could foreshadow said sharknado before it hits, and watch the tension skyrocket.

So there’s a stampede, and everyone is running down the town’s main street.

Farmer MC sees this, and puts his tractor into neutral rather than risk causing the slowest vehicular manslaughter in history. “What in the sam-hill is everybody runnin’ for?”

A lady with wide, crazy eyes stops and holds onto a post box to avoid being swept away in the crowd.
“It’s coming! Leave your tractor and run. Run!”

You still get to describe the sky darkening as overlapping fins blot out the sun, but this way by the time you get to that bit the reader is already crunching their popcorn. EVERYONE’S A WINNER!

With that out of the way, let’s find out…

2. “WHY ARE YOU TALKING LIKE THAT?”
A topic that I will immediately subdivide.

a) VOICE – You want to bring each character’s voice out. This is different from the previous post where we talked about Developing Characters, and more about giving them a recognisable way of speaking. There are a milli-billi-trillion things that can make up your character’s unique voice (formality, education, status, sense of humour… I might do an article on writing characters that delves more into voice) but for now I’ll just give one example of a Thing to Keep in Mind, and let you think of more on your own:

Maturity level – This could be child (short sentences & honest), teen (self-centred & emotional), adult-of-varying-maturity *COUGH me COUGH*, or any number of other gradations, right up to ent (ponderous to the point of glacial, requiring constant interruption to get anywhere).

b) KEEPIN’ IT REAL – You definitely want it to sound like real life, but you most certainly don’t want it to sound like real life. Wait, what? That’s right, and you’re going to hear this point whenever you read anything about writing fiction, because it’s a Big Key Principle (which is a category of thing I just made up): Fiction has to feel real, even while it’s being held to higher standards than reality.

Reality can sometimes be boring, and disappointing, but God/Thor/Spaghetti-Monster help you if your writing should ever become either of these things. So keep it real, but cut-cut-cut to that chase, and DO NOT let your characters talk about the weather (unless said weather is an approaching sharknado).

So what you DO want to do, is to think about how people really speak and emulate that. People talk differently depending on who they’re talking to (old love or new), and depending on what’s going on around them at the time (tea-party or dung avalanche), and so on.

3. “SLOWWW DOWWWWN.”
Your dialogue doesn’t always have to be back and forth slam-wham-bam: Sometimes you can have a few long sentences from one character, and only brief interruptions from a listener. You can have professions of undying love to noodles that occupy a good chunk of the page.

These help the reader to feel that calm you need every so often, and fit better with intimate scenes between just a couple of characters. Just make sure that the whole thing is still serving one of the four bona-fide story purposes I explored at the beginning, and vary the sentence length and structure for ease of reading.

4. “HURRY THE @&%!@ UP!”
So in the previous point I said that your dialogue doesn’t always have to be back and forth lightning-to-the-nipples stuff. Well sometimes it does. These two points together lead into the bigger topic of pacing, that should probably have its own article at some future point. I’ve mentioned before in part two of my articles on writing action that the right dialogue can really plait a saturn-rocket through your scene’s back-hair, by which I mean dramatically speed things up.

6. “CUT OFF SOME TAGS”
You could add a he said or a she said or an INSERT CHARACTER NAME HERE said to the end of every line of dialogue… It would make sense, but it would be awful. Instead maybe try to alternate between this and another technique: grouping things by character.

Go back up and have another look at the tractor sharknado story. Here we see that the old fart on his farm-equipment, and his action (stopping the tractor) is connected by the paragraph structure to his bit of dialogue.

8. “BREAK IT DOWN!”
*Shakes boogie tail feather* Yeah, no. What I mean by this is that you need to break the dialogue up with some other stuff AT LEAST every few paragraphs. A long ladder of dialogue can act like comic book panels, and the eye just flies over it.

If you want us to focus you’re going to need to describe some stuff (the topology of Bruno’s musculature), or add some action (Bruno tips a cow).

9. “TONE IT DOWN.”
This quote is ever so slightly rude, but it is eloquent, so it deserves a mention here: The failure mode of clever is asshole. You don’t want us to think to ourselves that your character’s witty line is actually kinda repugnant.

You especially don’t want to risk triggering this feeling when you’re introducing characters, during short stories, or in anything that a new reader is likely to get their hands on. Comments that go down great in the towel-flicking locker room are going to offend a big ol’ chunk of your audience, and you don’t have the opportunity in these situations to let the reader know that it’s “Just the character! I’m not like that!”

Here’s a good test – get your mum to read it.

Another thing to tone down is slang and accents. As tempted as you might be to write your leprechaun’s every utterance as a lilting sing-song, don’t do it. One or two fiddle-dee-dee-potatoes, at widely spaced intervals, and a reminder or two in their description will serve you much better in this, and save me from burying the annoying little bugger at the end of his rainbow.

That’s it for now, I hope you got something out of it, and please let me know if I missed anything that’s important to you when writing dialogue.