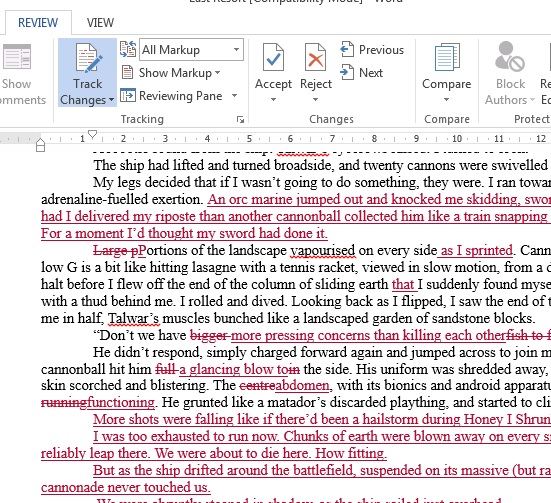 Today I’m going to talk about writing action scenes. I’m just hopping off the back of re-writing an old action scene, and thought I’d share my freshly sprouted thought mushrooms. Do try.

1. STAKES
Not the kind you hammer into vampires’ chesty bits on your night off. Story stakes. Their decisions here should impact on their journey as a character, as well as the plot. So what have you established that the characters stand to lose?  They might die? Okay… that’s a good staple. Like bran. Storyfibre. No, you need something meatier. Will the pet cat strapped to the conveyor belt, Toodles, go through the batterguns and into the deep frier? Will your PETA-protestor-protagonist catch the cackling-crazy, or shut-down the machinery? There’s no time for both…

Stakes come from knowing the ins and outs of your overall plot, and then your characters’ individual arcs. How you gonna predict all those butterfly-effects without pinning down every butterfly?

2. TWISTS
So kitty is cut free, and we breathe a sigh of relief. But Toodles is shredding your protag’s polyester shirt trying to get away. They hear a metallic clink behind them. WHAM. Red star vision, travelling floor hits face. Last thing before lights out is the smell of crazy’s cheetos-stained fingers, and a cackling laugh.

One good way to add twists is to re-write the scene. Take your sponge cake and stick some marshmallows on it. Torch the marshmallows. Give up and have scotch instead. Point being, the first time you write action is not crazy enough to surprise anyone, because you thought of it like that *clicks fingers* so why couldn’t they? If you want to dramatically fiddle with a scene without having to take copy-paste backups of it first, try using Track Changes. You can shuffle around bits from your first draft, modifying them to fit around the flood of mutant geese from the ventilation ducts.

3. STRENGTHS
What’s better than your hero busting out some ol’ John Wayne and haymakering the living stuffing out of all who dare oppose them? Well, unless they really are a cowboy with a strong right, pretty much anything. You want your heroes to forget their strengths like you want fish to fly and birds to swim. Okay actually that might be amazing. Poor analogy. Start again: You want your heroes to stick to their damn strengths. So Trogdor burninates, Hermione works things out, and Will Smith “makes this look good.”

4. WEAKNESSES
When your character is taking a whooping, it can be for any number of reasons. Sometimes though, it’s great to pick the obvious one, and then rock your protag’s face with a pool cue. For example, my prideful character, Yumiko, getting herself shot because she refused to back down. We all have weaknesses, and they can be powerful once in a while. Warning: also annoying if you bring them out again-and-again without further development.

5. RULES
This is more important for fantasy, but it is ULTRAMEGADOOPER important. Your world needs rules to keep the sparkly stuff believable. Could just be some foreshadowing of a hidden talent before they ram-out-with-their-spam-out and level the lacrosse stadium. It could also be a magical history explained in detail, with anecdotal treats, like sailing-ship pipesmoke rings to break the magical tension. Basically, don’t make it up as you go along, and if you do, at least go back a few chapters and sprinkle the seeds for the fifty-foot oak tree you just sprouted.

6. SNAP
Write in.
Lots of.
Short snappy sentences.
Alright, maybe not that bad, but hell, you’re not going to get their eye zipping along the page with a wall of text. You’re also going to hurt my brain if you stop mid-sequence to smell the daisies. Really, I might climb into your book, pop out of your keyboard and strangle you with an extension lead. TELL ME WHAT HAPPENS NEXT DAMMIT.

7. BEATING YOUR HEAD AGAINST A WALL
This is the most important one. You will naturally avoid sticking your characters into situations that you can’t imagine a way out of. You wouldn’t drive your car into the river. You wouldn’t push your kid’s pram into a rosebush. You don’t want to shove your character into a noose, on fire, at forty-thousand feet, with a sniper aiming for their bits. Because you’ve got absolutely no idea where to go from that.

Do it anyway. You’re going to spend the next week smooshing your face against the computer monitor, crying into a whisky sour (mmm, salty, salty tears). Despite what you might think at the time when you plunge your character into this predicament, you will figure out what to do next. Explain it to your partner. Your mum. Your boss. Your pekingese. They won’t help at all, but each blank stare is a sign. A sign that you’re onto something. Because if they had an answer, your scene is too obvious. Besides, you’re only using them as a sounding board for the tiny enslaved writer smurf that lives in a canoe floating in your inner ear. Which, by the way, is the cause of your tinitus. Oh, and your story really does need this.

There will be a part two (IT’S DONE NOW! Click away), as this is only half of the list that I combobulated. If you have any Action Writing Tips of your own, please share in the comments.

Until then, best regards,