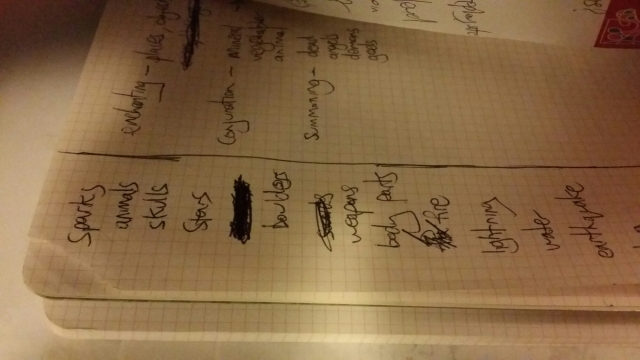 It occurred to me the other day: back when I started writing in the early nineties, I wrote uber-lists.

Fifty types of vehicle? Skateboard, parasail, monster truck, snow-shoes made from the same racket, with an ugg-boot gaffered to the top…

These lists added novelty to my writes. A protagonist from the first story I ever typed (gothic font, pop-art a-plenty) rode a quad-bike. At seven years old I already knew.

And so are lists.

Luckily, they fit perfectly with the way we take notes as authors. Hear me out: you have a broccoli-related brainwave while slugging back cocoa in your jimmy-jams, so you grab a notebook and jot that thought-nugget down. But where does it end up? Lost amid a thousand disparate ideas.

Will you see it again?
Unlikely.

But what if you had lists? Tens of lists? Hundreds of lists? You go to your green veg list and there it is!

I’m in good company. Robert Rodriguez, director, cinematographer, and writer of Planet Terror and Desperado, makes awesome films cheap. Rather than forty guys working CG and a scale Titanic re-construction, he wrote a list of the awesome stuff he already had access to. Cars, nuns, guns, zombie goo (chipotle sauce), and so on.

A Clinical Research Associate by day (google it), writer by night, D.R.Sylvester lives in Sydney, Australia with his patissiere wife and Siberian Wolf. His interests include travel, music (predominantly Metal), reading, & archery.
View all posts by D.R.Sylvester →
This entry was posted in Writing and tagged books, Lists, Notes, Planning, Robert Rodriguez, Writing. Bookmark the permalink.