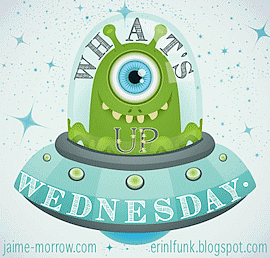 What’s Up Wednesday is a weekly blog hop created by Jaime Morrow and Erin Funk, to help connect writers on this writing journey. If you’d like to join, check out the blogs each week, get to know some of the others taking part, and spread some writerly love!

Here’s the link to my 1st one of these from June.

What I’m Reading
Under the Empyrean Sky, by Chuck Wendig. I got into reading this guy while I was googling for ways to refine my story. I stumbled across his  blog, terribleminds, and really dug the style.
I subsequently checked out this book, and I’m loving it so far. It’s about corn, floating sky cities, desperate bad luck, ships that sail on corn, competitive scavenging, the mayor’s bully-boy son, and punching back at an unfair world, right in the kernels.

Singer, by Brigid Collins. I found this on another blog that I’ve stumbled across and liked the voice of, Backwrites. So far so good.
I loved the opening prologue bit, and after a bit of desert walking that kind of lost me (appropriately enough) the 1st chapter was pretty rad too. The plot follows a quest to a sort of desert-dwelling Atlantis-of-no-return, and a fellowship led by the World’s Best Swordsman (incidentally a lady), also including a historian, a grumpy guide, and finally a singer (that can ONLY sing. No talky).

White Tiger, by Kylie Chan, again. I say again because I’ve read this one before, maybe three or four years ago. I had nothing to read following my holiday, and at the airport I did the mad dash around the bookstore newsagency for anything they had.

The story is about a maid teaching English to kindergarten children (in Hong Kong), who is offered a job as a full time maid in a handsome Chinese guy’s house on the peak (home to the most expensive real-estate-per-square-metre on the planet). Turns out he’s got a ludicrous amount of kung fu gear, is possibly a spy or gangster, and demons are trying to kidnap his adorable daughter.

Basically, it’s a bit like Anita Blake mixed with Monkey Magic, minus the slapstick.

Treasure Island, by Robert Louis Stevenson. You all know this one. I’m reading it for the first time, because when you write a pirate tale you’d best brush up on the classics.

What I’m Writing
Still working on Last Resort, which I’m planning as the first in a series of Urban Fantasy / Sci-fi tales following the adventures of Captain Roger, Space Pirate.

The plot in a nutshell:

“Charm only gets you so far, as Captain Roger finds out when overnight he shoots to #1 on the solar-system’s most-wanted. Before you can say shiver-me-timb… MUTINY!
He somehow gets the jump on the crew, marooning them on an asteroid, and sails to New Canton for a holiday (preferably somewhere far from the clutches of the Navy).

He is shot down by a blockade at the harbour mouth, crash lands in the side of the dome, and has to slog through the jungle to even reach the city.
When he finally gets his bags to the room, he grabs a well deserved drink and starts planning. He needs a new crew. In other words, a fresh start.

That would be great, but by day two the Meiji Ambassador’s got her claws into him, the Governor is brooding over a plot (with him at the centre), the Commodore is nipping at his heels, and his first-mate has slithered back to recover her ship.
Even more troubling, the Four Winds have begun to blow, and as each creature of the zodiac converges, the bounds of reality are starting to slip.

At least his tour guide is great, or would be if she’d stop involving him with her theatre aspirations.
If Roger wants to survive he’ll need more than just his usual self-interest and a dash of charisma. He’ll need to find what he was meant to be…”

At the moment I’m re-doing the middle chapter, with the big bad reveal(s), because turning points have gotta be done right.

Still re-writing the second draft now, and (kind of) on track to release in October.

What Inspires Me
In my writing I’m really being inspired by (the abovementioned) Chuck Wendig, because he seems to be the kind of author I’d like to be: writer of punchy fiction, ringmaster of a rabid blog community, characteristic style, and down-to-earth no BS attitude.

In the universe in general? A good blogger friend, Millie Ho gave me the link to a fantastic talk by Neil Gaiman, and I’ve gotten well into his stuff and thoughts on writing.

What Else I’m Up To
Growing a longer beard. It’s a long beard week this week, with no trips required for work, and I’m luxuriating in my flowing mane whilst listening to the new Beard Album by The Beards.

That’s all for this time round. Looking forward to checking out everyone else’s What’s Up posts!

19 Responses to What’s Up Wednesday #2