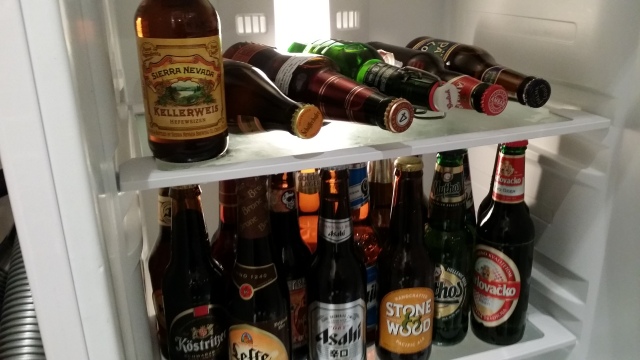 A very satisfactory day, ended with a fridge full of beers, each one from a nation represented in this year’s World Cup.

This was the doing of a good friend: after we all chipped in, he bought all the beers by the case and mix-matched them. Glorious stuff.

In my writing I have finally had my eureka moment with how the hero & heroine will escape from their predicament. It all came down to a few simple things in the end:

I used all these, weaving back and forth through the story to add sentences and paragraphs, sometimes tweaking what was there, sometimes setting up new triggers and elements. I think the result is an escape that should surprise and also feel real.

Now, where were those beers…

A Clinical Research Associate by day (google it), writer by night, D.R.Sylvester lives in Sydney, Australia with his patissiere wife and Siberian Wolf. His interests include travel, music (predominantly Metal), reading, & archery.
View all posts by D.R.Sylvester →
This entry was posted in Writing and tagged beer, books, escape scene, fiction, world cup, Writing. Bookmark the permalink.

6 Responses to Got it! Eureka! Also, World Cup beers!